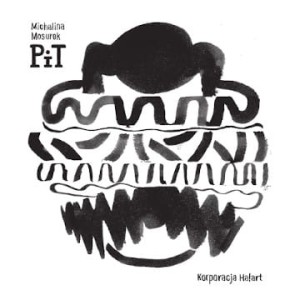 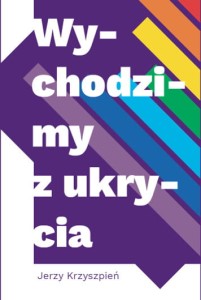 WE ARE COMING OUT OF THE CLOSET (Revised Edition 2019) 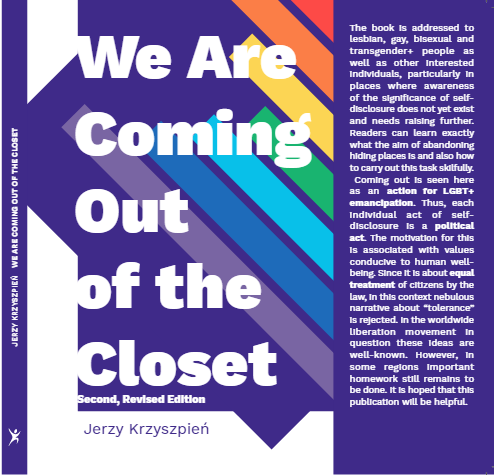 The book We Are Coming Out of the Closet is addressed to lesbian, gay, bisexual and transgender+ people, as well as other interested individuals, in places where an awareness of the significance possessed by self-disclosure doesn’t exist yet or needs further raising. The readers for whom the subject is new can learn what goal underlies abandoning closets and how to carry out this task skilfully. Those who in some degree have already gone through the issue may look at its details from the Author’s perspective. His reflections come from extensive reading and long-standing observation of developments in the world. In the coming out of particular individuals the Author sees acting for LGBT+ emancipation. Thus, he treats each positive act of self-disclosure as a political act. He associates the motivation for this activity with values conducive to human well-being. Since the issue concerns ethical behaviour, including equal treatment of citizens by the law, in this context the nebulous narrative about “tolerance” is rejected. In the worldwide liberation movement in question these ideas are well-known. However, in some regions important homework still remains to be done. This publication may be helpful in it.

Dr. Jerzy Krzyszpień as a lecturer at the Jagiellonian University of Krakow focuses on linguistic issues in the area of the English language. Since 1990 he has taken part in activities aimed at LGBT+ emancipation in various capacities: as the founder and president of a local group as well as the secretary of the board in a nationwide association, an active participant of European conferences, creator and executor of health promotion projects in collaboration with the World Health Organization, author of publications and translator of books. Since 1995 he has also been a guest lecturer at academic courses. Aware of the relationship between language and attitudes, with a publication in 1992 he initiated a grassroots reform of Polish in the area of names applied to sexual and gender identities, promoting among other things adjectival expressions as limiting stigmatization. Moreover, he has encouraged LGBT+ emancipation organizations to give up the term “tolerance” in favour of “equality”. In 2013 his website We Are Coming Out of the Closet was launched.